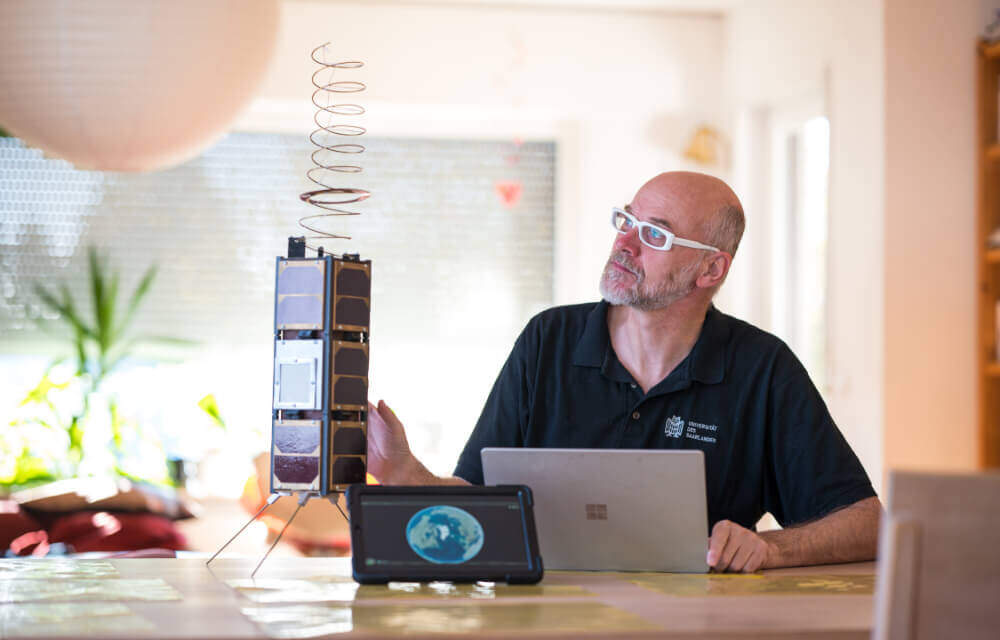 They are about the size of a shoebox, high-tech, and soon tens of thousands of them will be orbiting the earth – so called nano-satellites. They can, for example, take high-resolution photos of our planet, or reinforce telecommunications networks. However, these actions take energy and this resource is scarce in the compact high-tech devices. Computer scientists at Saarland University now show how the energy consumption of satellites can be planned in such a way that they always work optimally without ever overstraining their batteries. The results can be transferred to other application domains.

“The core of our current work is a so-called ‘scheduler’,” explains Holger Hermanns, Professor of Computer Science at Saarland University. This scheduler allows one to plan the numerous different activities that modern nano-satellites can perform, continually in advance, and to optimize them with regard to their energy consumption profile.

Of special note is the battery model which the Saarbrücken researchers’ planning method is based on: “We do not rely on the commonly used linear model, according to which battery charge is simply represented as a value between 100 and 0 percent,” says computer scientist Hermanns. “Our scheduler uses the kinetic battery model, which can also precisely account for charge fluctuations that are inherent in every battery”. The new satellite operation method thus allows long-term activity planning and scales smoothly to entire satellite fleets.

The researchers developed their new action planning tool by means of two GOMX-4 satellites from the Danish-Luxembourgish company GOMspace. Each time the satellites pass over the ground station in Denmark, they send down the telemetry data of their battery usage. Based on this data, a new action plan is calculated using the novel scheduler and then uploaded to the satellites. “By optimizing the plan each time the satellites fly over the ground station, we always ensure the best possible battery utilization,” explains Hermanns.

The market for so-called LEO (low-earth orbit) satellites is growing rapidly: Today, about 2500 active miniature satellites orbit our planet. Over the next 10 years launches for about 50,000 more have already been announced. However, the novel planning approach for battery usage goes beyond this use case and can also be transferred to other areas of application, such as e-mobility, drones, or smart home devices.

The researchers have published their results under the title “Managing Fleets of LEO Satellites: Non-Linear, Optimal, Efficient, Scalable, Usable, Robust” at one of the largest conferences on embedded software, the “International Conference on Embedded Software”. Besides Professor Holger Hermanns, Juan Fraire, Tobias Mömke and Gregory Stock from Saarland University participated. On behalf of the company GOMspace in Luxembourg, Fakhri Babayev and Eduardo Cruz were involved. The project is mainly financed by the European Research Council through the ERC Advanced Grant “POWVER” and the German Research Foundation DFG through the Transregional Collaborative Research Center “CPEC – Center for Perspicuous Computing”. Also involved is the “Key-Area Research and Development Program” of Guangdong Province in China.

A follow-up project with cooperation partners from Europe, Argentina and China has already been granted. The project, which is funded by the EU under the “Marie Skłodowska-Curie Actions” is entitled “Models in Space Systems: Integration, Operation, and Networking” and is scheduled to start in October 2021.


800 scientists and about 2000 students from more than 80 nations make the Saarland Informatics Campus (SIC) one of the leading locations for computer science in Germany and Europe. Five world-renowned research institutes, namely the German Research Center for Artificial Intelligence (DFKI), the Max Planck Institute for Computer Science, the Max Planck Institute for Software Systems, the Center for Bioinformatics and the Cluster for “Multimodal Computing and Interaction” as well as Saarland University with three departments and 21 degree programs cover the entire spectrum of computer science.

Public relations work at the Saarland Informatics Campus is supported by the Competence Center Computer Science Saarland, funded by the European Regional Development Fund (ERDF) and the Saarland State Chancellery.