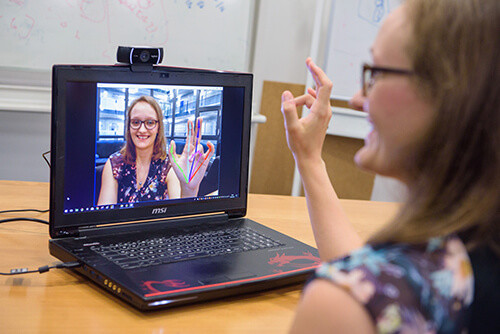 The students in the new course will also deal with neural networks with which a three-dimensional movement model of the hand bones can be calculated based on a two-dimensional video image. Photo: Oliver Dietze

They prepare complex data material, analyze it using statistical and artificial intelligence methods in order to calculate previously unknown trends and facts. Such specialists are not only highly sought-after on the labour market. Even now, thousands of well-paid positions remain vacant. Saarland University is therefore introducing the bachelor’s and master’s degree program “Data Science and Artificial Intelligence” for the coming winter semester. Renowned experts from the research institutes of the “Saarland Informatics Campus” will teach the methods of data Science, artificial intelligence, machine learning and big data in an application-oriented manner.

Starting in the coming winter semester, the Department of Computer Science at Saarland University will offer a six-semester bachelor’s programme in “Data Science and Artificial Intelligence”. Students can enrol from August to the end of September. The application deadline for the international master’s program is June 15. However, applications can also be accepted after this date.

“Artificial intelligence is now used everywhere, in online shopping, autonomous driving and medical data analysis,” explains Jens Dittrich, professor of computer science and head of the “Big Data Analytics” group at Saarland University. According to Dittrich, the progress that artificial intelligence has made in recent years can be seen in automated translation in particular. This also applies to so-called data science. Since the amount of data is now growing in every industry (big data), it has moved to the forefront. The focus of “data science” is not only on the data itself, but also on the way in which it is processed and evaluated with the help of methods from artificial intelligence and machine learning.

“In the new course, students learn how to analyze problems in such a way that they can be solved automatically using methods from the fields of artificial intelligence and data science,” explains Dittrich. He continues: “In order to really use the methods as tools and not just as theoretical constructs, they work on practical problems at an early stage.” To this end, agreements have already been concluded for application subjects with other disciplines such as computational linguistics, physics, materials sciences, chemistry, psychology and biology. More are planned.

Dittrich designed the new course with a group of experts from the neighboring computer science institutes and computer linguistics. Six internationally renowned research institutions, including the German Research Center for Artificial Intelligence (DFKI), the CISPA Helmholtz Center for Information Security and the two Max Planck Institutes for Computer Science and Software Systems, are part of the Saarland Informatics Campus, on which more than 800 scientists work. For Dittrich, this environment is the unique selling point that makes the new program stand out from the other degree programs on offer in Germany. In addition, the computer science department  has distinguished itself in teaching for years. “Students regularly give us top marks in the nationwide CHE ranking,” says Dittrich.

Graduates do not have to worry about their carreer prospects after graduation. “There is simply a lack of specialists who know how to really solve these problems,” says Dittrich. The Donors’ Association for the Promotion of Humanities and Sciences in Germany calculated the need for data analysis professionals on the basis of job offers from a large online job exchange and came to the conclusion that last year around 10,000 specialists in this field were sought in Germany. For a further study, the association interviewed more than 600 large corporations, medium-sized and small companies as well as start-ups. The surveyed companies estimate that by 2023 around 455,000 experts on the subject of complex dara analysis will be needed in Germany.