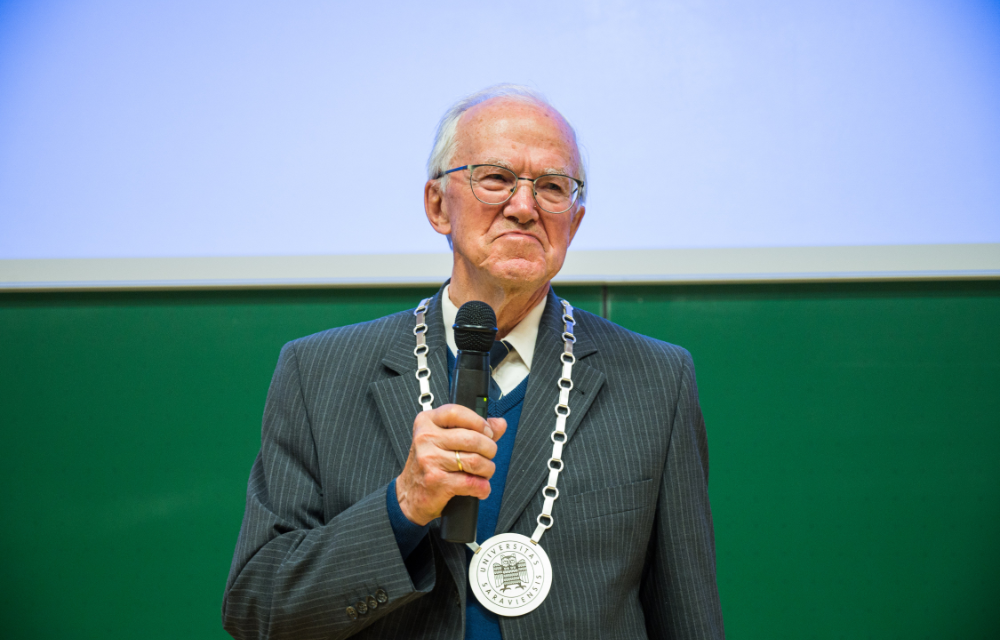 Prof. Günter Hotz after receiving the honorary senator title during the fiftieth anniversary of the Department of Computer Science on May 25, 2019. Photo: Oliver Dietze

On November 16, Günter Hotz, professor emeritus of applied mathematics and computer science, pioneer of computer science in Saarbrücken and honorary senator of Saarland University, will celebrate his 90th birthday. The jubilarian, who lives in St. Ingbert (Saarland), is considered one of the fathers of computer science in Germany. He was a member of the committee that gave the subject its name and drafted the first study regulations. He has been associated with Saarland University for almost six decades.

Born in Büdingen-Rommelhausen, Günter Hotz studied mathematics and physics at the universities of Frankfurt and Göttingen after graduating from high school in Friedberg. He then worked in industry, where he was involved in the development of postal check automation and the first computer-aided air traffic control system in the Federal Republic. In 1962, his career took him to the Saarbrücken Institute for Applied Mathematics, headed by Prof. Johannes Dörr. Thanks to his commitment, he created central conditions for the establishment of the Max-Planck-Institute for Computer Science, the German Research Center for Artificial Intelligence (Deutsches Forschungszentrum für Künstliche Intelligenz, DFKI) and the Leibniz Center for Computer Science, Schloss Dagstuhl, and thus contributed decisively to the profile of Saarland as a computer science location and its university.

As an academic teacher, Professor Hotz has supervised more than 50 dissertations. About 30 of his diploma students, doctoral students and co-workers were appointed to professorships at universities and universities of applied sciences. In the scientific community, Günter Hotz acted, among other things, as founding president of the German “Gesellschaft für Informatik ” (GI) and as a member of the Science Council and several scientific academies and societies. In 1986, he was the first scientist from the Federal Republic of Germany to be admitted to the Academy of Sciences of the GDR.