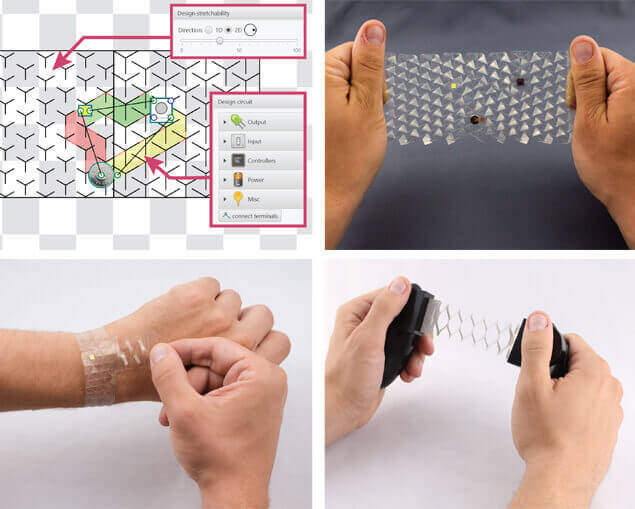 Stretchable circuits have the advantage that they also work in textiles such as clothing. However, their production is considered to be very costly. A new, simplified process has now been presented by two computer scientists from Saarland University. It is based on a so-called laser cutter and its precise, fast cuts. These are provided by easy-to-use software developed by Daniel Gröger and Professor Jürgen Steimle for designers. Since the necessary materials are available on the market, almost any person can now produce stretchable electronics for their own purposes.

A jacket that silences incoming calls when its sleeve is plucked. A bandage that sounds an alarm when the joint is bent too much. These are two of many applications that are only possible with stretchable circuits. “However, current manufacturing processes are time-consuming and very complex,” explains Daniel Gröger, a doctoral student in computer science at Saarland University. Hence, together with Professor Jürgen Steimle, Gröger has developed a process to produce stretchable circuits within a few minutes. The heart of the process is a so-called laser cutter. Its laser beam continuously removes targeted material. In this way, it makes many precise cuts in a very short time. The researchers take advantage of this by having the laser cut a certain pattern into the material, similar to a Y shape. The size of the pattern, the thickness of its lines and the distance between the cuts determine the elasticity of the material. The material consists of a conductive and a non-conductive layer. The circuit is created by the laser ablating the conductive layer at pre-defined points during cutting.

Since it is not only fast, accurate cutting that difficult for humans, but also the planning of where to cut, the researchers have automated that, too. The result is software allowing designers to specify the outline of the piece, similar to a drawing program, and determine which part of it should be stretchable. They determine the degree of elasticity using a virtual slider. Finally, they place the electronic components. The software then calculates the position and nature of the Y shapes, including the circuit diagram, and displays everything. The fast result is unusual, because the calculation of the best ladder route so far has required a lot of computing time and power. The researchers, however, have devised a shortcut by presenting the calculation problem as a graph, for which efficient calculation is possible. In this way, the researchers produced three prototypes, each taking less than five minutes. The first is a transparent bracelet with a light-emitting diode. On its side is a tab, similar to the rotating wheel on the side of a watch. Pulling on either the strap or on the tab switches the light emitting diode on and off. This fulfills the basic functionality of a stopwatch, says Gröger. Pulling the strap corresponds to starting and stopping. If you pull the wristband, the time measurement starts again. The other two prototypes are a flexible controller for computer games and a sensor that is integrated into an elbow bandage and measures the degree of diffraction. The materials used, such as plastic foils coated with indium tin oxide, are available online. Gröger therefore believes that the new process also enables people who are not familiar with materials research to create stretchable circuits. The researchers point out that the current test models can withstand at least 1000 strains, but this does not yet meet commercial quality criteria for durability. Nevertheless, Gröger is convinced: “Even if the technology still has to be improved, the concepts will hold”.