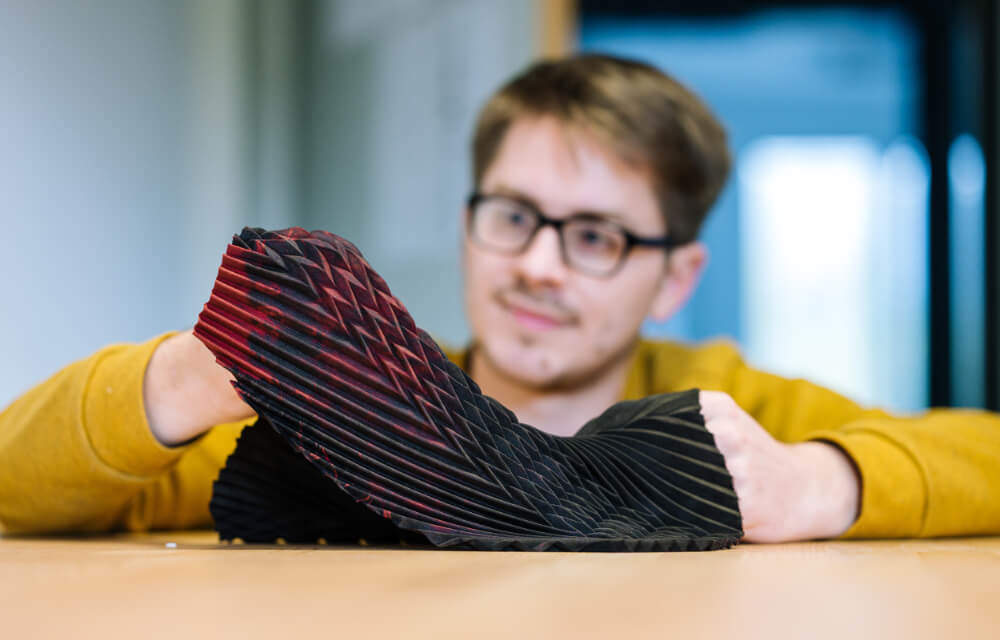 Bruno Fruchard presents a textile that changes its conductivity depending on the degree of stretch. ©Oliver Dietze

Whether in fitness, medicine or in the entertainment industry, IT devices worn on the body, such as smart watches, are becoming increasingly popular. Such wearables benefit from the input device fitting as naturally as possible to the body – for example as electro-sensitive fabrics, so-called e-textiles. Computer scientists at Saarland University show how these special textiles can be produced in a comparatively easy way, thus opening up new use cases.

“Our goal was to integrate interactive functionalities directly into the fibers of textiles instead of just attaching electronic components to them,” says Saarbrücken-based computer science professor Jürgen Steimle. In his research group on human-computer interaction at Saarland Informatics Campus, he and his colleagues are investigating how computers and their operation can be integrated as seamlessly as possible into the physical world. This includes the use of electro-interactive materials.

Previous approaches to the production of these textiles are complicated and influence the haptics of the material. The new method makes it possible to convert textiles and garments into e-textiles, without affecting their original properties – they remain thin, stretchable and supple. This creates new options for quick and versatile experimentation with new forms of e-textiles and their integration into IT devices.

“Especially for devices worn on the body, it is important that they restrict movement as little as possible and at the same time can process high-resolution input signals“, explains Paul Strohmeier, one of the initiators of the project and a scientist in Steimle’s research group. To achieve this, the Saarbrücken researchers are using the in-situ polymerization process. Here, the electrical properties are “dyed” into the fabric: a textile is subjected to a chemical reaction in a water bath, known as polymerization, which makes it electrically conductive and sensitive to pressure and stretching, giving it so-called piezoresistive properties. By “dyeing” only certain areas of a textile or polymerizing individual threads, the Saarbrücken-based computer scientists can produce customized e-textiles.

In their test runs, the researchers have produced gloves that can digitally capture hand movements, a zipper that transmits different electric currents depending on the degree of opening, and sports tapes that act as user interfaces that are attached to the body.

Also, materials other than textiles can be treated with the process. Audrey Briot, an artist from Paris, has created an evening gown with touch-sensitive feathers that generate sounds via a computer when touched. She polymerized the feathers using the Saarbrücken computer scientists’ method. The dress was nominated for the STARTS Prize of the European Commission.

Background Saarland Informatics Campus:
800 scientists and about 2000 students from 81 nations make the Saarland Informatics Campus (SIC) one of the leading locations for computer science in Germany and Europe. Five world-renowned research institutes, namely the German Research Center for Artificial Intelligence (DFKI), the Max Planck Institute for Computer Science, the Max Planck Institute for Software Systems, the Center for Bioinformatics and the Cluster for “Multimodal Computing and Interaction” as well as Saarland University with three departments and 18 degree programs cover the entire spectrum of computer science.