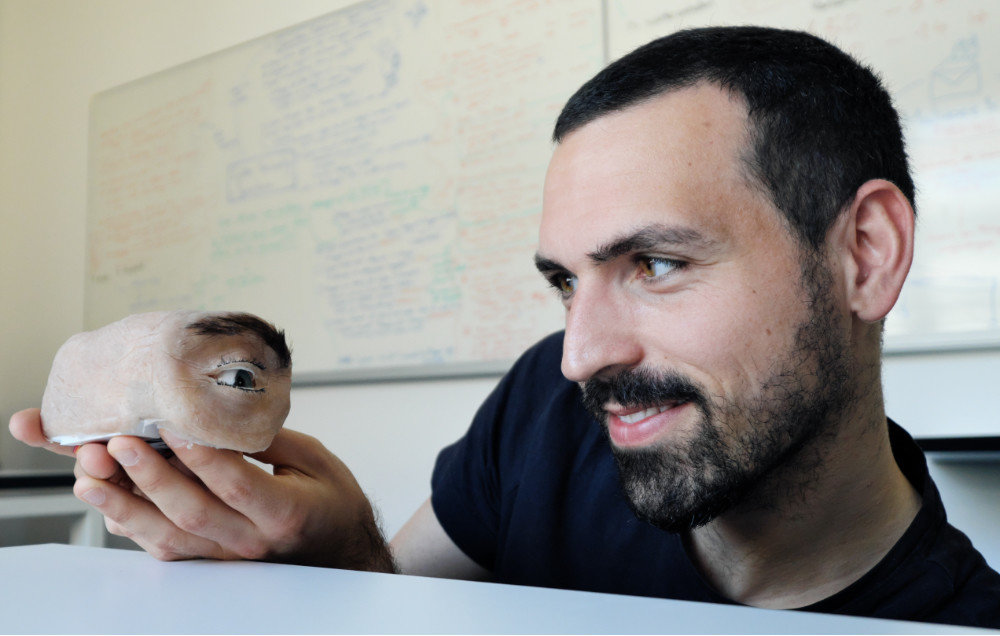 Microphones and cameras are everywhere today: in smartphones, laptops, even in refrigerators and televisions. Many people are now used to these ‚sensing devices’. As a result, they are no longer seen for what they actually are – ubiquitous eyes and ears. A team of computer scientists from Saarland University is using anthropomorphic design to critically question this sensory technology that has become part of everyday life. With ‘Eyecam’ they now present the prototype of a webcam modeled on the human eye.

“The goal of our project is not to develop a ‘better’ design for cameras, but to spark a discussion. We want to draw attention to the fact that we are surrounded by sensing devices every day. That raises the question of how that affects us,” says Marc Teyssier. In 2020, the French scientist completed his doctorate on the topic of anthropomorphic design in Paris. Now he is a postdoctoral researcher in the Human-Computer Interaction (HCI) Lab at Saarland University in Germany.

The research team at Saarland Informatics Campus has developed a webcam that not only looks like a human eye, but also realistically imitates unconscious eye movements such as blinking or raising the eyebrow. “The research is part of a whole series of work within a large EU-funded project, the ERC Starting Grant ‘InteractiveSkin’. Here we are researching how interfaces that have properties of the human body can improve the interaction between humans and computers,” says lab director Professor Jürgen Steimle on the context of the research.

“With ‘Eyecam’ we are exploring the question of whether a technical device, or artifact as we call it in technical terms, should reflect its function in its design,” adds computer scientist and member of the HCI group Marion Koelle, who did her doctorate on the social acceptance of body-worn cameras. The decision to replicate a human eye was made because of its metaphorical nature. “There are different ways of seeing, all of which have their own unique connotations, such as observing, recognizing, watching, or even spying. Also, a camera designed as an eye can send nonverbal signals through facial expressions, opening up a whole new layer of interaction that hasn’t existed in technical artifacts before,” Koelle adds about the concept behind the project.

In their paper, the researchers use the unique capabilities and optics of their new development to explore different facets of ubiquitous sensing. Already today, webcams are a potential privacy risk. ‘Eyecam’ exaggerates this aspect, acting as an observer by opening its eye and tracking the user with its gaze. Alternatively, the anthropomorphic camera could be used for self-reflection, with the artificial eye getting ever more tired and repeatedly falling shut as the user sits in front of the computer late at night. Or it could take on the role of a pet that is simply there, looking around from time to time and reacting with delight when its owner enters the room.

“Our application scenarios are fictional and are intended to encourage people to think about how we interact with artifacts today, but also in the future. What is special is that we can experience and recreate our imagined scenarios with the help of a physically existing prototype,” says Marc Teyssier. To reach as many people as possible with their thought-provoking development, the group has published the blueprints for their device.

The original publication titled “Eyecam: Revealing Relations between Humans and Sensing Devices through an Anthropomorphic Webcam” was accepted by the world’s largest conference in the field of human-machine interaction. In May, it will be published at the 32nd “ACM Conference on Human Factors in Computing Systems (CHI)” in Yokohama (Japan). Besides Marc Teyssier and Marion Koelle, Paul Strohmeier, Bruno Fruchard and Professor Jürgen Steimle, all from Saarland University, were involved in the project.

A PDF preprint version of the paper can be found at: https://hci.cs.uni-saarland.de/wp-content/uploads/projects/critical_design/eyecam/teyssier_chi21_eyecam.pdf