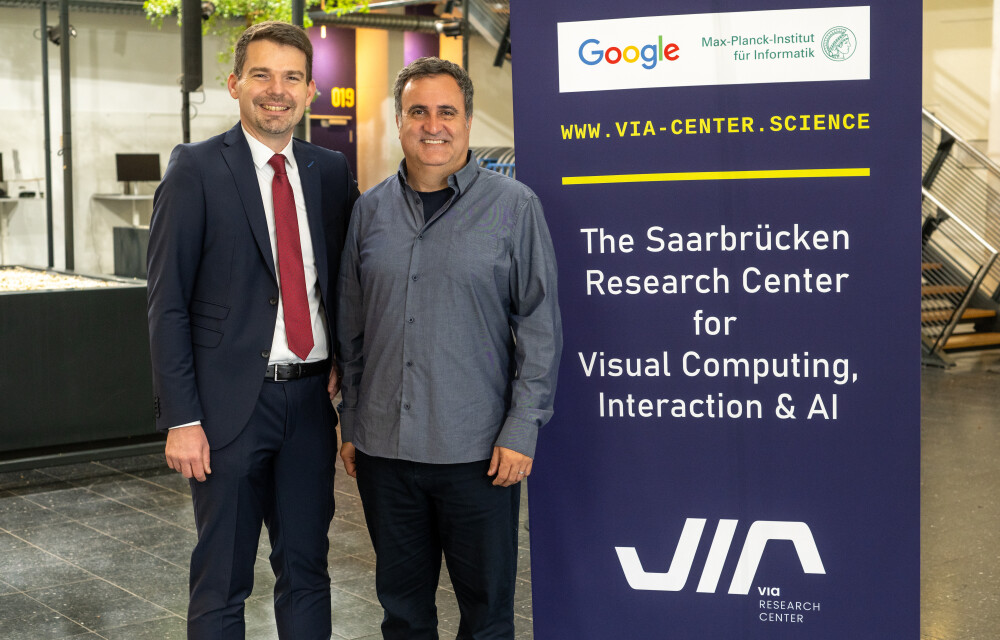 Prof. Dr. Christian Theobalt, head of the VIA Center that opened today, together with Shahram Izadi, Senior Director and Head of AR at Google. Photo: Manuela Meyer

In June, the Max Planck Institute for Informatics in Saarbrücken, Germany and Google have announced a strategic research partnership to start the “Saarbrücken Research Center for Visual Computing, Interaction and Artificial Intelligence (VIA)” at the Max Planck Institute for Informatics. During the opening event today, November 9, representatives from politics, science and industry are gathering in the Günter-Hotz lecture hall at Saarland University to learn more about the mission and research of the new Center.

The “Saarbrücken Research Center for Visual Computing, Interaction and Artificial Intelligence (VIA)” conducts basic research in frontier areas of computer graphics, computer vision, and human machine interaction, at the intersection of artificial intelligence and machine learning. Google and the MPI for Informatics will realize joint research projects. The Center will work closely together with Saarland University and the numerous internationally renowned computer science research institutions on the Saarland Informatics Campus. The site is among the worldwide leading research locations in the fields of computer graphics, computer vision, human-machine interaction and artificial intelligence.

Professor Christian Theobalt, Managing Director of the Max Planck Institute for Informatics and Head of the “Saarbrücken Research Center for Visual Computing, Interaction and Artificial Intelligence”, says: “We are very excited about this close cooperation with Google. There is great potential in this collaboration between one of the leading scientific institutes in computer science and one of the world’s largest industrial research departments. We see outstanding opportunities to gain pioneering scientific insights and to positively shape many areas of computer science that are already having a significant impact on people’s lives today.”

Dr. Shahram Izadi, Senior Director and Head of AR at Google, says: “Today is a great day for Google and our partners at the MPI for Informatics. The ‘Saarbrücken Research Center for Visual Computing, Interaction and Artificial Intelligence’ will pave the way for new algorithms that, on the one hand, empower profoundly advanced functional capabilities in the name-giving areas and, at the same time, enable better accountability for the underlying algorithms in the form of enhanced explainability, robustness and trustworthiness.”

Saarland’s Minister-President, Anke Rehlinger, says: “1,000 scientists and over 2,000 students from 81 nations make our federal state a future-oriented and competitive computer science hub with appeal far beyond its borders. The Max Planck Institute for Informatics is one of the supporting pillars of our internationally recognized research location, a beacon in the exploration of algorithms, machine learning and computer graphics. With this strong performance, the MPI has brought to Saarland an innovative leader like Google, who will give new impetus to our research and science location. The economy of Saarland also benefits from such partnerships between top-level research and top companies, for example, through start-ups or technology transfer with new added value and forward-looking jobs. This will help us to master the huge challenges posed by structural change.”

Photos of the opening ceremony will be available for download after the event at https://sic.link/viaopening.

The Max-Planck-Institute for Informatics in Saarbrücken is one of the world’s leading research institutes in Computer Science. Since the institute’s establishment in 1990 it has researched the mathematical foundations of information technology in the areas of algorithms and complexity, as well as logic of programming. At the same time researchers at the institute have developed new algorithms for various application areas such as databases and information systems, program verification, and bioinformatics. Basic research in visual computing, i.e. computer graphics and computer vision, at the intersection to artificial intelligence and machine learning, is also an important focus of the institute. With publications at the highest level and the education of excellent young researchers, the MPI for Informatics plays a major part in advancing basic research in computer science.

Background Max Planck Society:
The Max Planck Society is Germany’s most successful research organization. With 30 Nobel Laureates among the ranks of its scientists, it is on equal footing with the best and most prestigious research institutions worldwide. The more than 15,000 publications each year in internationally renowned scientific journals are proof of the outstanding research work conducted at Max Planck Institutes – and many of those articles are among the most-cited publications in the relevant field. The currently 86 Max Planck Institutes and facilities conduct basic research in the service of the general public in the natural sciences, life sciences, social sciences, and the humanities. Max Planck Institutes focus on research fields that are particularly innovative, or that are especially demanding in terms of funding or time requirements.

Background Google:
Google’s mission is to organize the world’s information and make it universally accessible and useful. Through products and platforms like Search, Maps, Gmail, Android, Google Play, Google Cloud, Chrome and YouTube, Google plays a meaningful role in the daily lives of billions of people and has become one of the most widely-known companies in the world. Google is a subsidiary of Alphabet Inc.

Background Saarland Informatics Campus:
900 scientists (including 400 PhD students) and about 2100 students from more than 80 nations make the Saarland Informatics Campus (SIC) one of the leading locations for computer science in Germany and Europe. Four world-renowned research institutes, namely the German Research Center for Artificial Intelligence (DFKI), the Max Planck Institute for Informatics, the Max Planck Institute for Software Systems, the Center for Bioinformatics as well as Saarland University with three connected departments and 24 degree programs cover the entire spectrum of computer science.

Prof. Dr. Christian Theobalt, head of the VIA Center that opened today, together with Shahram Izadi, Senior Director and Head of AR at Google. Photo: Manuela Meyer