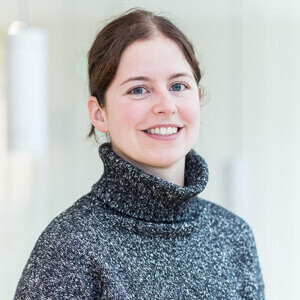 As part of the Federal Ministry of Education and Research’s Science Year 2019 – Artificial Intelligence and the project “#KI50: Artificial Intelligence in Germany – Yesterday, Today, Tomorrow”, the Gesellschaft für Informatik (GI) is awarding prizes to ten scientific talents in the field of artificial intelligence. The deciding factor for the victory is a public online vote, which runs until November 17 of this year.

One of these potential #KI50 newcomers is Kathrin Grosse, a PhD student at Saarland University and a member of the Saarbrücken Graduate School for Computer Science at Saarland Informatics Campus. At the CISPA Helmholtz Center for Information Security, she is researching adversarial machine learning, a technique that attacks machine learning processes using manipulated input data, for her doctoral thesis. Since October 2013 she has been studying at the Saarland Informatics Campus. Her master’s thesis is entitled “An approachfor ontological pattern based summarization” and was supervised by Jilles Vreeken and Professor Gerhard Weikum. She has been working on her doctorate since April 2016.

Grosse is not the only researcher in this competition to have learned scientific technique at SIC. Xucong Zhang, now a postdoctoral fellow at ETH Zurich, has also been nominated.

With the project “#KI50: Artificial Intelligence in Germany – Yesterday, Today, Tomorrow”, the GI wants to draw attention to committed young AI researchers from all disciplines. GI President Professor Hannes Federrath commented: “In the context of our 50th anniversary and in the context of the Science Year 2019 – Artificial Intelligence proclaimed by the Federal Ministry of Education and Research, we want to demystify AI technology and clarify questions of the past, present, and future: What developments have the technologies undergone, what were the most important milestones and who were the most influential minds, especially in Germany? What are the benefits of AI technologies and where are they already integrated today, and where are they not? What are the major challenges for the future, and who will be the key minds in the development of AI in Germany?